On 04/10/2018 at approximately 10:24 P.M. a husband and wife were the victim's of an Armed Robbery/Attempted Carjacking while in the parking lot of their condominium/residence located in the 2200 blk of Gulf of Mexico Drive, Longboat Key, FL. The suspect vehicle driven by 27 YOA Latarious Harvey pulled in behind the victim’s vehicle, Harvey remained in the suspect vehicle while two B/M suspects exited and proceeded to rob the victim’s at gun point. Longboat Key Police Detectives are seeking the identity of this person in reference to the Armed Robbery Investigation. If you have information please contact Crimestoppers of Sarasota by calling 941-366-TIPS or online at www.sarasotacrimestoppers.com 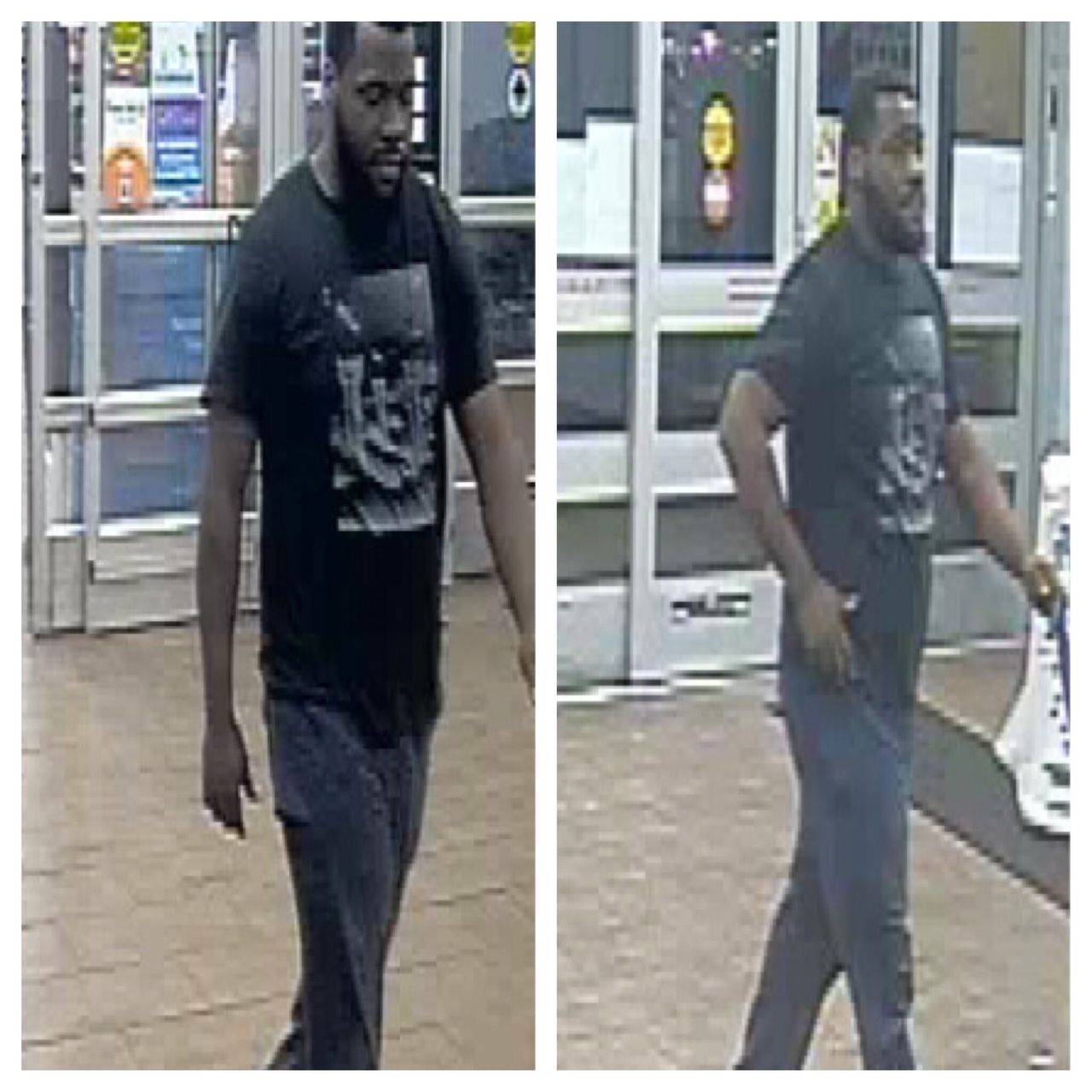 The on-scene investigation revealed the 2005 Ford Mustang crossed the grass median, for reasons that remain under investigation and entered the westbound lanes. As a result, a traffic crash occurred between the Ford Mustang and the three other vehicles involved. Katarina Huffman was pronounced deceased on scene. 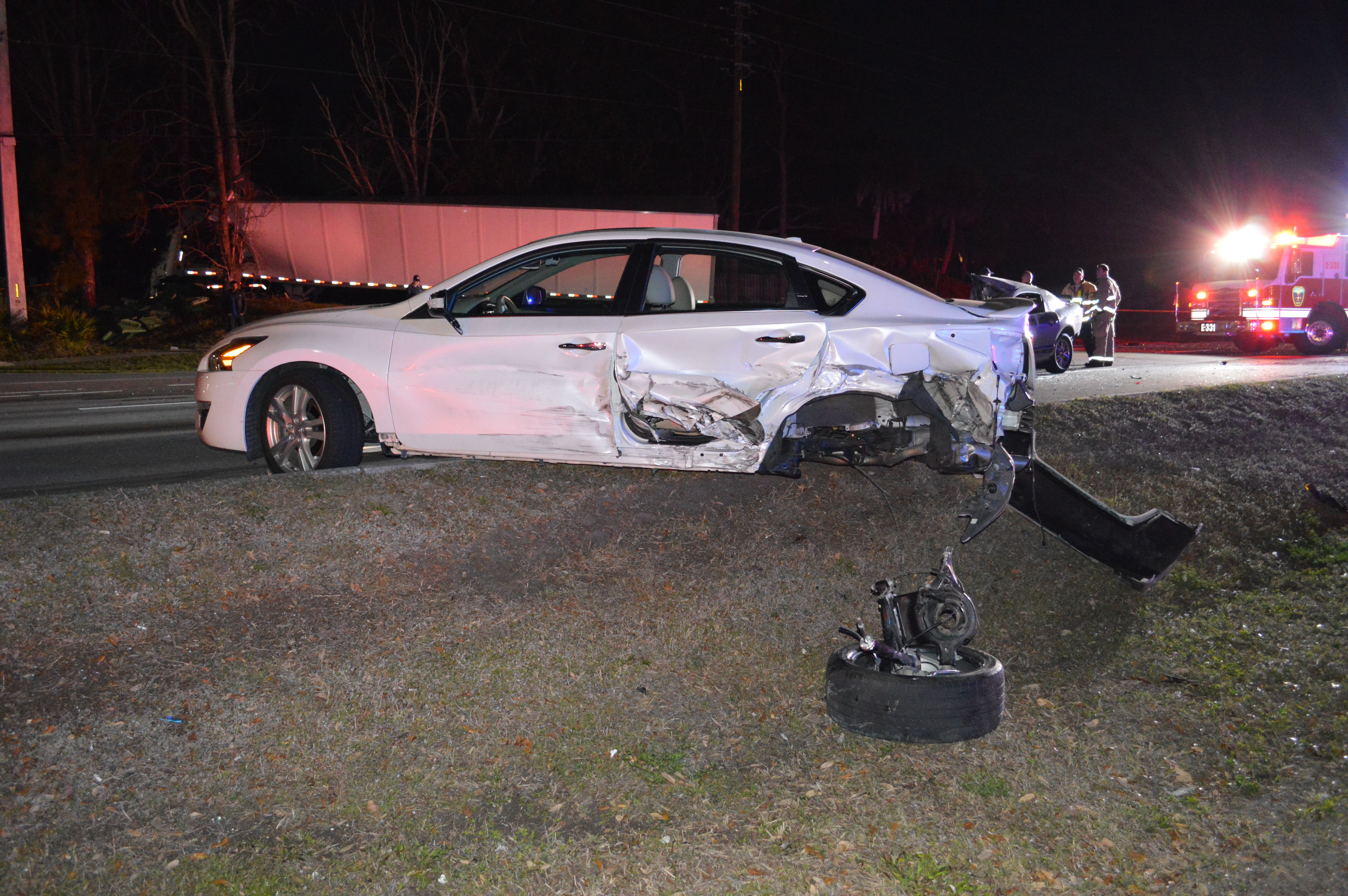 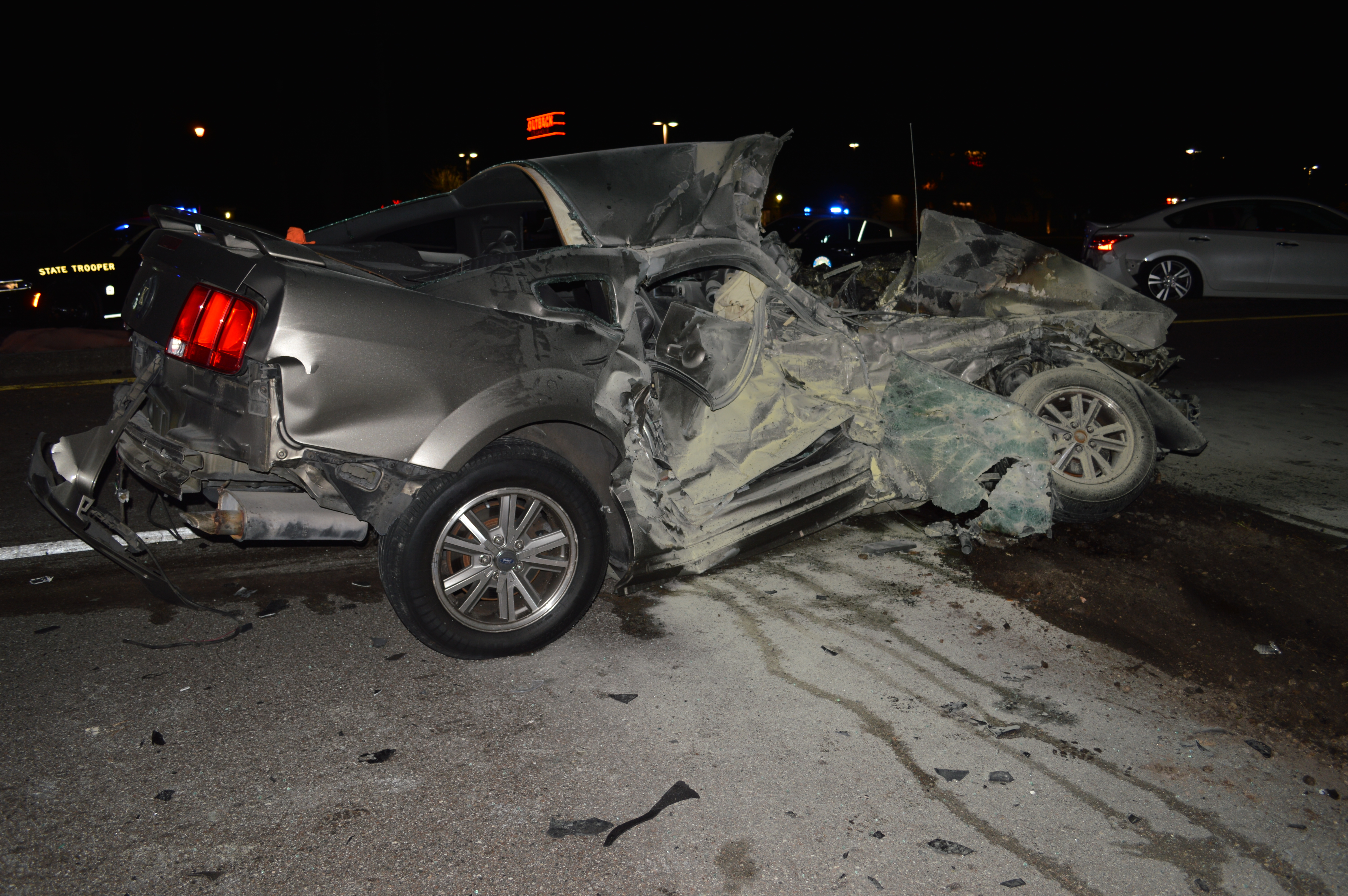 On 1/10/18 at 1:30am, two black males wearing masks entered the home at the 8100 block of Porto Chico Avenue in North Port Florida.  As a result 19-year-old Trent Bartol-Thomas was shot and killed.  The suspects were seen leaving in a light colored vehicle.

If you have any information on the subjects or vehicle, please contact Crimestoppers of Sarasota by calling 941-366-TIPS or online at www.sarasotacrimestoppers.com 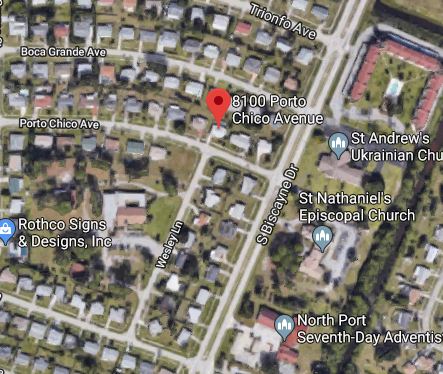 On 12/21/17 at 0330 hrs, the two listed suspects smashed a window to the Roll your own Tobacco located at 5761 Beneva Rd.
Video surveillance captured the two unknown male suspects wearing gloves, ski masks, and hoodies.  They were carrying a suitcase and backpack.  These suspects stole several e-cigarette products.
The one suspect is wearing a shirt with the words "If it aint't XO then it gotta go" in a circular pattern on the back.
If you are able to identify the two suspects, you are asked to contact Crimestoppers of Sarasota by calling 941-366-TIPS or online at www.sarasotacrimestoppers.com 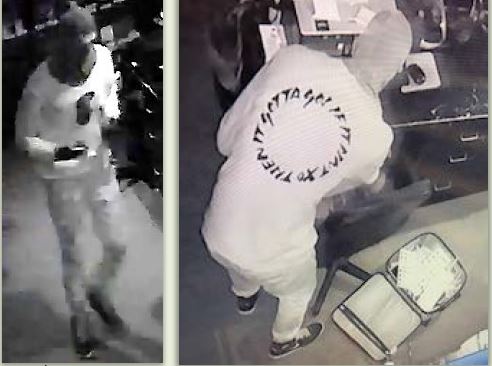 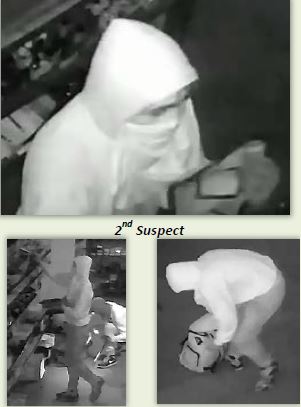 On 12/14/17 at 1100 hrs, the suspect entered Kay’s Jewelers located at the UTC mall in Sarasota.  Upon contact with the sales associate, the suspect requested to see two diamond engagement rings.  While holding two of the rings, he asked to see a third.  At that time, the suspect snatched the ring out of the associate’s hand and fled the mall.

The suspect is described as a 45-55 yr old Hispanic male, 6’0” 225 lbs.  He was wearing a blue/white plaid shirt, dark pants, and black shoes.  The suspect left in a 2000’s silver Chevy compact car with black rims.

If you recognize this suspect, you are asked to contact Crimestoppers of Sarasota by calling 941-366-TIPS or online at www.SarasotaCrimestoppers.com 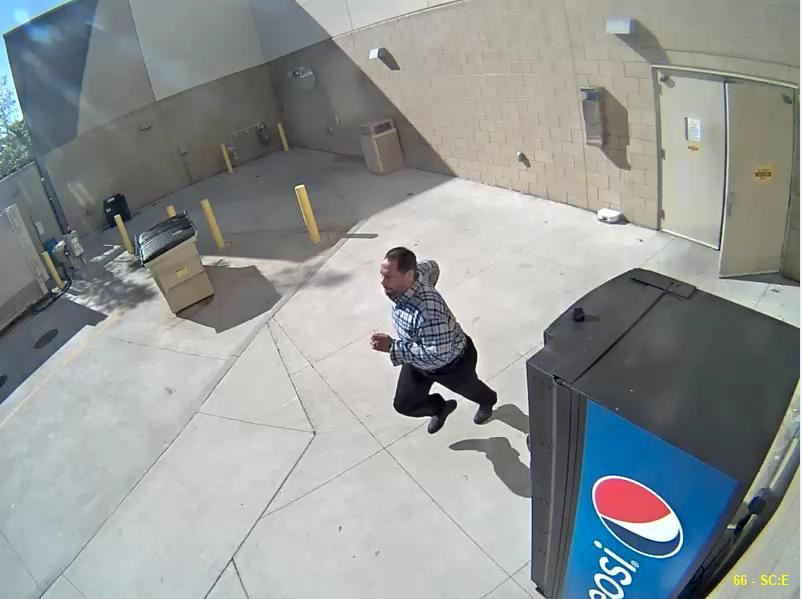 The North Port Police Department is asking for the public’s help to identify the shooter in an early evening shooting on November 16th. Officers were called to the scene of one person shot on Herbison Ave. The suspect had already fled. Officers and K9 Officers attempted to locate the suspect, however were unsuccessful.

If anyone has any information related to this crime please contact Crime Stoppers of Sarasota by calling 941.366.TIPS or online at www.SarasotaCrimeStoppers.com. 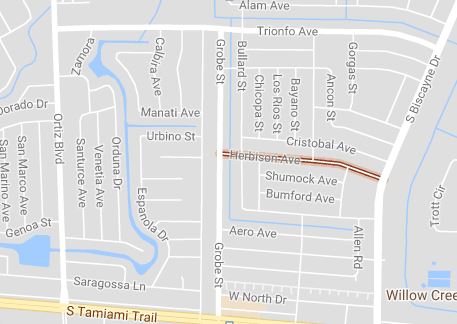 On 11/5/17 at 1345 the listed individual was observed on video stealing items from the Macy's Department store located at University Town Center Mall.  The suspect stole the items from the kiosk display shelve and concealed them inside of a blue and white stripped bag.
The suspect is described as a b/f, approximately 5'6".  She was wearing a purple colored dress  with a matching hair wrap and a large black purse.
If you are able to identify this person and would be interested in a reward, you are asked to contact Crimestoppers by calling 941.366.TIPS (8477). 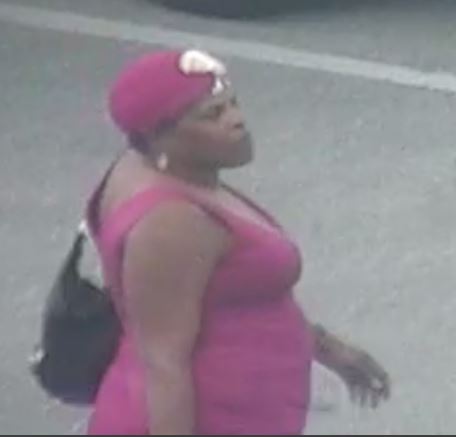 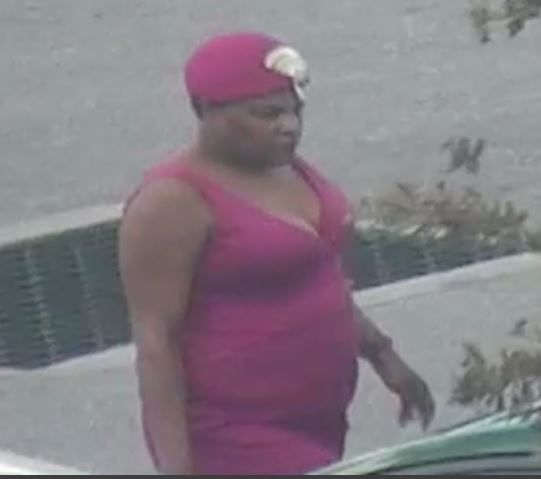 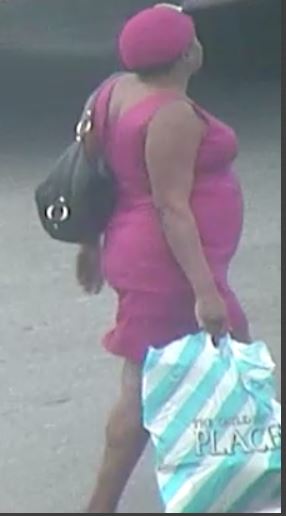 The Sarasota County Sheriff’s Office is asking for the public’s help to identify a suspect who robbed a Sarasota gas station early Friday morning.

Deputies were called to Shell at 5100 Fruitville Road, at 3:30 a.m., for reports of an armed robbery. According to the store clerk, the suspect approached him while he was standing outside and led him into the store at gunpoint. The suspect demanded cash and fled on foot westbound on Fruitville Road. Deputies and Venice Police Department K-9 units responded and attempted to locate the suspect however, were unsuccessful.

The suspect is described as a white male in his mid 30’s with an average build, approximately 5’10” tall, and 180 lbs. At the time of the robbery, he was wearing a black t-shirt with a light-colored long sleeve shirt underneath it. The suspect also had a t-shirt wrapped around his face and wore work gloves.

If anyone has any information related to this crime please contact Crime Stoppers of Sarasota by calling 941.366.TIPS or online at www.SarasotaCrimeStoppers.com.

Update: Another robbery occurred in Manatee County on 10/1 at 2340 hrs, at the 7-eleven on Pearl Avenue/US 41.  The suspect, a black male with dreads, is likely the subject from the robbery in Sarasota.  he was wearing the same clothing and used the same verbiage when demanding cash from the clerk.

Deputies responded to the 7-11 store located at 5420 N. Lockwood Ridge Road in Sarasota, shortly before 6:30 a.m. Saturday morning for reports of an armed robbery.

The suspect was armed with a silver handgun and fled the store with the cash drawer. The suspect fled westbound on DeSoto Road in a silver four-door sedan. He is described as a black male in his early twenties, wearing a black hoodie, dark jeans, black sneakers and gloves.

Anyone with information related to this incident is asked to contact Crime Stoppers by calling 941.366.TIPS (8477). 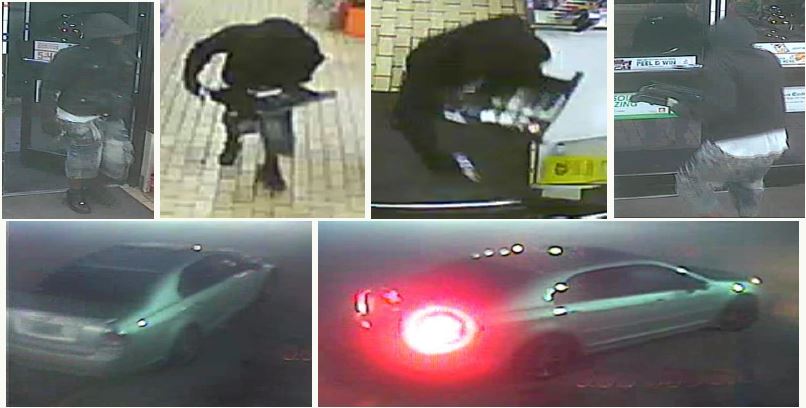 The Sarasota County Sheriff’s Office is asking for the public’s help to locate a 39-year-old registered sexual offender wanted on charges of Lewd or Lascivious Molestation of a 3-year-old child.

Deputies were first contacted on September 16, when the child’s parents reported that Ronald Correa, DOB 08/19/78, made inappropriate contact twice, with their 3-year-old. Correa, a registered sex offender, was temporarily staying at the family’s home at the time however, he did not report his address to law enforcement, thus violating sex offender requirements. When deputies attempted to serve the warrants at Correa’s home on Friday, the residence was vacant indicating that he may have fled the county.  If you have any information as to Correa's whereabouts, please contact Crimestoppes. 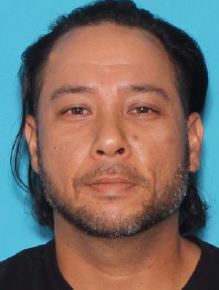